The clothing of roman soldiers was very different from that of rich traders and nobility. The soldiers wore simple clothes that were designed to be practical and suitable for a soldiers life.  Exampels of military clothing included the Balteus, Caligae and Subligaria. The rich traders wore clothes deigned to show their elevated status.

A balteus is a belt worn over one shoulder to carry a weapon, such as a sword. A balteus can support a greater weight than a standard waist belt, while still allowing for easy access to the weapon.

In ancient Rome, the balteus (plural: baltei) was usually made from leather and used to carry a sword. It was popular to adorn the balteus with metal, beautiful stones or both. 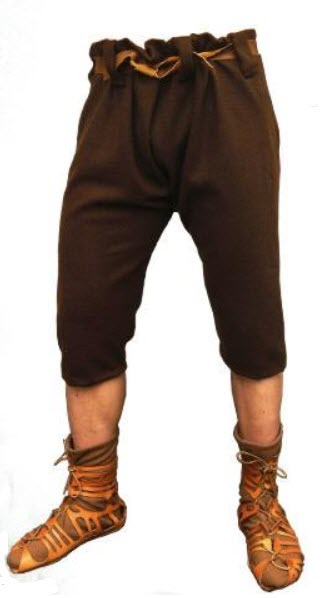 Eventually, Roman soldiers picked up the habit of wearing braccae, a type of woolen trousers, but it took a while because when the Romans first encountered tribes wearing trousers they considered the garment very effeminate and unsuitable for men. (Roman men at the time wore tunics that went down to the knee.)

Roman braccae were usually held up with the help of a drawstring. The preferred length of the pant leg varied depending on climate, from just above the knee in warm locations and down to the ankles in cold conditions.

Throughout the history of both the Roman Republic and the Roman Empire, legionaries and auxiliaries wore a type of military boots called caligae (singular: caliga).

Caligae were made from leather, and iron hobnails were hammered into the heavy soles to make them more durable and provide additional traction. The hobnails could also cause extra damage when an enemy was kicked or stomped on.

The boots were laced up at the center of the foot and the lacing continued to the top of the ankle.

A caliga was made from three layers of leather:

Unlike modern boots, the caligae had a very open design, and was thus suitable for warm climates where issues such as foot fungus would be a bigger risk than frost bite.

Roman soldiers would normally not wear socks in their caligae, but this changed a bit as the Roman Empire expanded into colder climate regions and we do for instance know of woolen socks being worn with caligae by Roman soldiers in Britain.

The belt was adorned with metal fittings to signal the rank of a soldier (including officials).

The Roman province Pannonia, located by the River Danube, became renowned for their production of cingulum militare.

The word accintus, which means soldier, is derived from the name of this belt.

Roman soldiers were expected to sleep out in the open, keeping themselves warm in their cloaks. The cloaks were therefore very large, typically more than body length, but double-folded when worn so that the cloth only reached the knees when the soldier was on the move.

One example of a commonly used cloak-type in ancient Rome is the sagum, worn by Roman soldiers on top of their armor during both the Republic and the early Empire.

It was made from unwashed wool saturated with lanolin, and consisted of a simple rectangular segment of cloth fastened by leather or metal claps, or with a fibula. Traditionally, the sagum was dyed bright red.

The ancient Roman soldiers wore a scarf to protect the neck from being chafed by the armor. This scarf was known as a focale (plural: focalia). Since it could also be used to wipe the face with, it was sometimes referred to simply as the sudarium, which means sweat cloth.

Soldiers were not the only ones to wear focale in ancient Rome; it was for instance common for sick people to wrap their neck with a focale, and focalia were given as gifts during Saturnalia.

The soldier’s focale was made from wool or linen.

How to wear it

In Roman art, the focale is usually shown as loosely knotted in the front. Sometimes, a soldier will wear it with the ends tucked inside his armor.

One example of a piece of art where you can see how the focalia were worn is the Arch of Septimus Severus in the Forum Romanum in central Rome.

The paenula was a warm outer garment made from wool. It consisted of a large piece of cloth with a hole for the head to go through (like a poncho). When worn, the cloth would hang in ample folds around the body. In colder climates, a paenula would usually have a hood.

Originally, only low-ranking people in ancient Rome would wear a paenula, such as slaves and soldiers. In the 3rd century, the paenula was picked up by higher-ranking people, partly because it was such a convenient garment when traveling on horseback. It’s status continued to climb, and it eventually became declared as proper everyday dress for senators (who were urged to save the chlamys and togas for state occasions).

A.) A decorative skirt of leather or fabric strips worn around the waist of Roman and Greek soldiers to protect the upper legs. The strips could be fitted with metal studs or plates.

B.) Epaulette-like strips worn on the shoulders.

C.) Strips worn at the back of the helmet to give the neck some protection without limiting mobility. (This type of pteruges is not associated with the ancient Roman army.)

Subligaria (singular: subligaculum) was the name for various types of undergarnments worn by some of the ancient Romans.

Subligaria could be worn by both men and women. It was especially strongly associated with athletes, gladiators and stage actors.

The Roman soldiers of the republic and early empire wore a basic tunic under their armor. In most cases, it was made of wool.

Initially, the tunics simply had openings for the arms, but later sleeves became popular. Sleeved tunics were typically worn together with braccae (trousers).