The helmet of a Roman soldier was known as the galea. Galeae were also worn by certain gladiators, but these helmets were normally quite different from those utilized by soldiers.

The first examples of Roman helmets show a rather strong influence from Etruscan helmets of the Nasua type, but Greek helmet designs also had an impact on early Roman helmets.

You can find more information about these various helmets farther down in this article, except for the Ridge helmet which has its own article on this site. 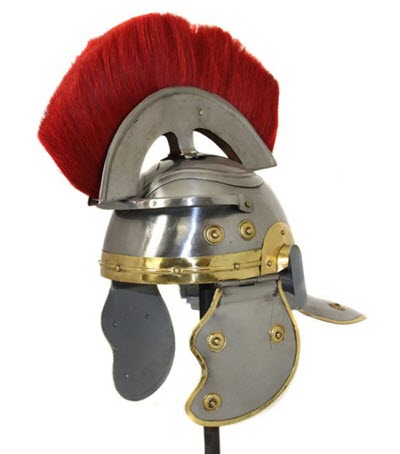 Some galeae used by legionaries were adorned with crests made from plumes or horse hair. The most well-known crest color is red, but evidence indicate that other colors occurred as well, such as purple, black and yellow, and on some helmets there might even have been alternating colors.

Texts by Vegetius and some surviving sculptures indicate that legionaries wore their crests longitudinally on the helmet while centurions had their crests mounted transversely.

Exactly when crests were worn remains unclear. There are some indications hinting to early empire period centurions always wearing their crests, even during battle. Centurions during other periods probably wore them only occasionally. For legionaries, crests were probably also an occasional thing and not something they would wear frequently.

The gladiator type known as murmillo (plural: murmillones) wore a large helmet adorned with a plume crest or horsehair. The metal of choice for the helmet was usually bronze, and the front of the murmillo’s helmet featured an ornate grill-style face visor. The murmillo-class of gladiators were created during the early imperial period, when the Gallus-class was abolished.

Members of the gladiator-classes samnis and hoplomachus might also have worn helmets with crests; possibly large feathered ones.

The Montefortino helmet started out as a Celtic helmet that was later adopted by the Romans. It is a military helmet used from circa 300 BC and through the first century AD. During the centuries, it underwent several changes.

This helmet was not called Montefortino by the Celts or Romans; we call it Montefortino helmet today because a helmet of this type was discovered in a Celtic burial site in the Montefortino region of Italy.

Generally speaking, older Montefortino helmets are more decorated than those produced later. That’s because the Republican Legions consisted of levied men that had to purchase their own equipment. The Marian reforms changed this, and the Roman soldiers were issued equipment instead, which typically meant equipment that was less labor-intensive to make and not made with a specific individual in mind.

Just like the Montefortino type helmet, the Coolus helmet was a direct descendant of older Celtic helmet types.

The Coolus helmet was a globular or hemispherical helmet, typically made from brass. Most of them were hammered to shape, but some were spun on lathe instead. Coolus helmets are usually rather plain, although ridges or raised panels are common on the cheek-pieces. The crest knob was turned, cast soldered or riveted on.

For a period of history, both Montefortino helmets and Coolus helmets were in use in the Roman army.

The Mannheim helmet is a sub-type of the Coolus helmet. 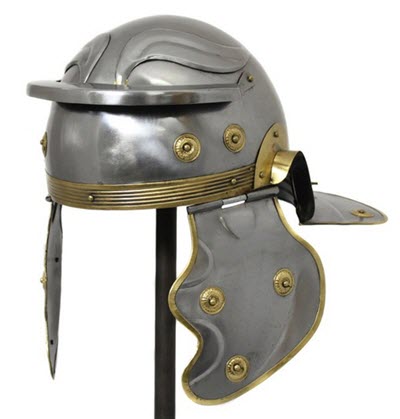 This is a legionary iron helmet of the mid-first century AD, and its usage continued into the second century. This means that for some time, it was used parallel with (the probably more common) Montefortino and Coolus helmets.

This version of the Imperial Gallic is similar to Gallic G, but the eyebrows are different and the neck guard more sloping. The trend with more sloping neck guards seem to have started during the second part of 1st century AD and continued through the second and third centuries.

Just like Gallic G, the Gallic H is made from iron.

This helmet is very similar to Imperial Gallic H and is from the same period, but is made from brass. According to one theory, the brass helmets of this period were for soldiers of higher rank. At least three found Imperial Gallic I helmets show evidence of feather holders, an adornment that is very rarely found on iron helmets.

This type of helmet appears to have been mass-produced, but was never the less adorned with gilded motifs.

The integral brass cross-braces placed flat against the skull makes this helmet extra durable at certain critical points, which probably came in very handy if the wearer was attacked by an enemy wielding a Dacian falx. The success of this helmet might have been what caused the Roman army to order other helmets types to be retro-fitted with such cross-braces for use in fights against the Dacians.

In art, centurions are often depicted wearing Imperial Italic D helmets, but the fore and aft crest attachment hooks indicate that it was probably a helmet worn by regular soldiers. Possibly, it was created for a specific unit, and that is why it is so distinctive and have gilded motifs. It could for instance have been a helmet for the Praetorian Guard. Another school of thought have suggested that the Imperial Italic D is the product of a specific workshop who made stylish helmets for soldiers who were willing and able to pay extra to get a fancy helmet.

With these helmets, the crossbar seems to have been a part of the original construction and not an “after market addition”. There are brass lunate decorations between the crossbars.

The most well-known example of a Imperial Italic G helmet was found in cave near Hebron in Israel. This helmet is believed to have been taken there as war-loot by Jewish Zealots associated with the Bar Kokhba Revolt against Emperor Hadrian. This revolt, where Jews of the Roman province of Judea rebelled against the Roman Empire, took place circa 132-136 AD.

One of the most well-preserved of all Roman Imperial helmets is an Italic H helmet known as the Niedermörmter helmet. (Named after the place in Germany where it was discovered.)

The Niedermörmter helmet is made from bronze, although at least one iron Italic H helmet is known to exist.

The Niedermörmter helmet is heavily adorned and the cross bracing across the skull is embossed instead of applied. A dome-shaped knob is located at the crown of the head where the braces meet. The neck guard is extremely deep.

Based on typology, the Niedermörmter helmet is believed to hail from the late Antonine or Severan periods, circa 180-235 AD.

The late Roman ridge helmet consisted of a bowl made up of either two or four parts, and these parts were united by a longitudinal ridge.

The late Roman ridge helmet was a combat helmet worn by soldiers of the late Roman army. The late roman era is generally considered to have started with the accession of the Emperor Diocletian in AD 284 and ended with the deposition of Romulus Augustulus in 476.

One of the earliest examples of a late Roman ridge helmet is the Richborough helmet, which was created around the year 280 AD.

The skull was made from two or four parts

One very important difference between the late Roman ridge helmet and earlier helmets used by Roman soldiers is that the skull of the ridge helmet was constructed from at least two main parts.

Some bipartite helmets with metal crests have been found, such as the River Maas helmet and the Intercisa-IV helmet.

Many discovered quadripartite helmets have a nasal.

A majority of the late Roman ridge helmets that have been found show evidence one of two types of adornments:

About the Late Roman Army

The late Roman ridge helmet was worn by soldiers of the late Roman army. Late Rome is a historical period generally seen as starting in AD 284 when Diocletian became emperor and ending in 476 when emperor Romulus Augustulus was deposed. Emperor Romulus Augustulus deposition by Odoacer is considered the end of the Roman Empire in the West, the end of Ancient Rome, and the beginning of the Middle Ages of Western Europe.

The third century AD was market by chaos and big changes, and as a result, the Imperial Roman army of the Principate underwent major transformations that had an impact on many aspects of army life – including the personal equipment used by the soldiers.

In the 4th century, the Imperial Roman army became very heavily dependent on conscription, and the salaries and benefits for army men became very low compared to how it had been before. Compared to the army of the first and second centuries, the Roman army was now also to a much larger degree comprised of barbarians from outside the empire.