The pugio was a dagger carried by Roman soldiers. Like the gladius, the pugio was chiefly used for stabbing. One very famous occasion where multiple pugiones were utilized was the killing of Julius Caesar in 44 BC.

The term pugio is derived from the root peuĝ-, which means stab in Proto-Indo-European. It is the same root from which the English word pugilist (meaning boxer) is derived.

The pugio is often mentioned in texts written in the Roman Empire, such as texts by Cicero, Tacitus and Suetonius. The senator and historian Tacitus (circa 56 – circa 120 AD) does for instance write about a soldier that was executed for only wearing a pugio and not a sword while digging a trench.

This is how the Roman writer Vegetius writes about the pugio in the 4th century BC:

A stroke with the edges, though made with ever so much force, seldom kills, …. On the contrary, a stab, though it penetrates but two inches, is generally fatal. … the body is covered while a thrust is given, and the adversary receives the point before he sees the sword. This was the method of fighting principally used by the Romans …

When we read texts by the Roman statesman Cicero (106 BC – 43 BC), the pugio comes across as a weapon favored when someone high-ranking is to be assassinated. A pugio was a small weapon that could easily be concealed in the folds of an upper-class Roman garment. When the Roman historian Seutonius (circa 69 – after 122 AD) writes about the killing of Julius Caesar, he says that all the attackers used pugiones, and that some of them later committed suicide with their pugio. 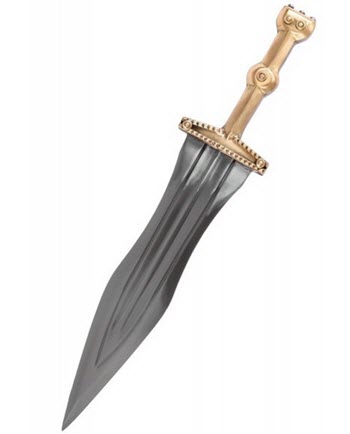 A standard Roman pugio from the early 1st century AD would have a large blade and be 18 cm – 28 cm long and at least 5 cm wide.

There were two main blade configurations during this period:

The hilt was usually 10-13 cm long overall, with a fairly narrow grip. The hilt had two layers of horn, wood or bone sandwiching the tang. Each such layer was overlaid with a thin iron plate. On many pugiones, the hilt was adorned with silver inlay.

Changes during the 1st century AD

Just like many other types of equipment used by Roman soldiers, the pugio went through some notable changes during the first century. As early as the first half of the century, the rod tang was introduced and the practice of riveting the hilt through the shoulders of the blade vanished. Some rod tang pugiones from this century were extra narrow (some less wide than 4.5 cm) with little or no waisting. Rod tang pugiones without hardly any midrib also existed.

Pugiones from the early 3rd century have larger blades than earlier pugiones, and typically have a crescent shaped pommel expansion on the handle.

Roman soldiers would wear their pugio in a sheath. Several different sheath configurations existed, with these three types being especially common:

This sheath had a curving metal plate at the front and back, which surrounded a wooden lining. The metal of choice was usually iron.

This type of sheaths had round free-running suspension rings, which were attached by bifurgated mountings that were riveted on.

The metal plate that would be visible when the pugio was worn was usually adorned in some way, while the other plate was plain. The adornments could for instance be inlayings of silver or brass combined with colorful red, green or yellow enamel.

This sheath was made from wood, and covered with leather. A flat and heavily adorned metal plate was attached to the leather. The metal was usually iron, and the adornments were typically silver inlays and enamel.

The suspension rings, which were hinged to the sides of the sheath, looked a bit like small Roman military buckles.

On some sheaths of this type, tin was used for the inlays instead of silver, but that seems to have been rather unusual.

This type of sheath was made from iron. Two curved channels ran together at the lower end of the sheath, ultimately forming a flat round terminal expansion. At the middle and top of the sheath, there were horizontal bands keeping the channels together. To these bands, round suspension rings were attached.