The manica was a type of plated arm protection worn by certain Roman gladiators and, later, also by Roman soldiers. In Latin, manica simply means sleeve.

The plates of a standard manica were probably not long enough to cover the whole circumference of the arm. Instead, they would extend from the upper arm to the thumb, while leaving an area at the back without protection. 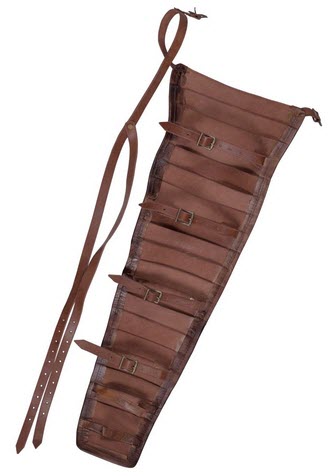 A manica was made from iron, bronze or a copper alloy. It consisted of curved and overlapping metal segments fastened to leather straps. The strips would be longer at the top of the arm, and each strip would have holes at its lower edge through which rivets were passed from the inside to hold the leather straps.

The plates overlapped upwards, with the inside of the elbow being especially well protected by multiple plates.

According to historian M.C. Bishop, a likely configuration would be:

The practice of wearing hooped metal protection is an old one, so the creators of the first manicae could have been inspired by several different types of armor. A type of hooped arm protection known as cheires was for instance used by cavalry in the First Persian Empire (circa 550-330 BC), and in the Saka, Parthian and Kushan kingdoms hooped metal protection was worn on both arms and legs.

In Rome, the manica was first worn by a type of gladiators known as crupellarrii.

Art depicting Roman soldiers fighting in the Dacian Wars show some of them wearing manica. Manicae can for instance be seen at the Tropaeum Traiani at Adamclisi and at the famous Trajan’s Column in Rome (completed in the year 113 AD).

We don’t know if the use of manicae were commonplace during these wars or not. We do know that they Dacian were armed with two-handed falces, against which manicae could have offered some much needed protection.

Examples of sites where finds identified as manicae have been discovered:

The manica was discovered in a soldiers barrack at the Steincheshof kastell. This fortification was once one of the many fortifications that ran along the Germanic frontier (Limes Germanicus) of the Roman Empire, separating the empire from the unsubdued Germanic tribes.