In ancient Rome, the term gladius (plural: gladii) was referred to any sword, but today we only use it to denote the primary sword of the Ancient Roman foot soldiers. Several other words have been derived from this root, such as gladiator (“swordsman”) and gladiolus (“little sword”, a genus of perennial flowering plants with sword-shaped leaves).

The gladius was sheathed in a scabbard. This scabbard was either attached to a belt by the waist or on a shoulder strap.

The gladius was in service 3rd century BC – 3rd century AD. This means that it was used during both the Roman Republic and the Roman Empire.

Towards the end of the 2nd century AD, the spatha began to gradually replace the gladius in the Roman legions, but many gladii were still in use during the 3rd century.

The word gladius was probably borrowed into Latin from Celtic, possibly through an Etruscan intermediary. The ancient Celtid word *kladi(b)os means sword.

Early ancient Roman swords were very similar to the swords used by the Greeks, but in the third century BC the Romans started using swords inspired by the Celtiberians, a group of Celts or Celticized peoples inhabiting the central-eastern Iberian Peninsula. These Celt-inspired swords are known as gladius hispaniensis (Hispanic sword).

One of the earliest mentioning of a gladius hispaniensis in text is found in the works of Roman historian Livy (64 or 59 BC – 12 or 17 AD). Livy relates a story about a fight between the Roman Titus Manlius Torquatus and a Gallic soldier that allegedly took place by a bride over the river Anio around the year 361 BC. In this story, Manlius straps on his gladius hispanus before the battle and then uses it to thrust twice under the shield of the Gaul during the fight, killing him by piercing his abdomen.

When a gladius was produced, blade strength could be achieved in one of two ways:

A.) Welding strips together. This created a sword with a channel running down the center.

B.) Fashioning a single piece of high-carbon steel. This word would be rhomboidal in cross-section.

The owner would often have his name engraved or punched into the blade.

A metallurgical sword study published in 2005 has helped shed some light on how gladii could have been produced in ancient Rome. One of the studied swords was a gladius Hispaniensis from Chiusa, dated to the 4th century BC. Chiusa was located in what we today know as South Tyrol in northern Italy. The sword was 40 cm long and had a wasp-waist close to the hilt.

According to this study, the Chiusa sword was created from a single bloom. It was forged from a temperature of 1237 °C, and some form of carburization might have been employed because the carbon content of the material increased from 0.05–0.08% at the back side of the sword to 0.35–0.4% on the blade. 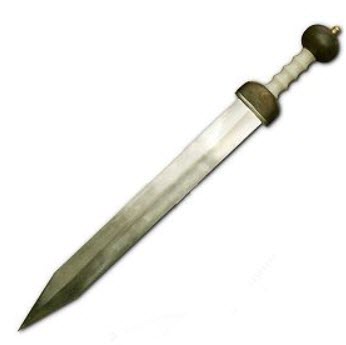 The gladius was two-edged and had a tapered point. The edges made it suitable for cutting and slashing, while the point was used for stabbing. Roman infantry soldiers were trained to thrust their sword into their opponent at stomach height, but also to take any other opportunity to cause injury, such as reaching beneath the shield to slash the enemy’s kneecaps.

The hilt was known as the capulus. It was often adorned, especially if the sword belonged to a higher-ranking person, such as an officer or dignitary.

The gladii were used during a very long period of time and were produced in several different designs.

In addition to the early gladius hispaniensis, the three main gladius groups recognized by modern day sword collectors are Mainz gladius, Fulham gladius and Pompeii gladius. These names were not used by the Romans; they are derived from where or how the canonical examples were discovered.

This is the oldest version of the gladius and it was used during the Roman Republic, from the early 200s BC.

This type of sword has a wasp-waist or leaf-blade curvature. Compared to the later gladii, it was longer and heavier, and the leaf-shape was pronounced. The largest known gladius hispaniensis exceeded one kilogram in weight.

The gladius hispaniensis blade was circa 60-68 cm long, with the total sword being around 75-85 cm. The width of the blade was roughly 5 cm. 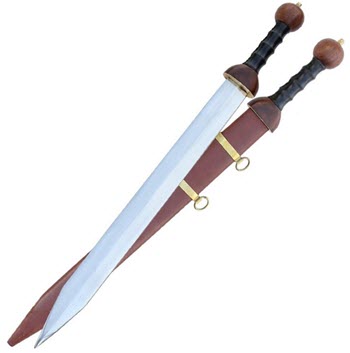 The Mainz gladius blade was circa 50-55 cm long, with the total sword being around 65-70 cm. The width of the blade was roughly 7 cm. An average sword, with a wooden hilt, would weigh around 800 grams.

The sword is named after Mainz, a German city in the Rhineland-Palatinate. This city developed out of Mogontiacum, a permanent camp founded by the Romans on the west bank of the river Rhine, opposite the mouth of the river Main, around the year 13 BC. Swords were made in this camp, and later in the city, not just for local use but for export to the north.

The Mainz gladius and the Pompeii were used parallel for a long period of time. Even by the 4th century BC, many legionaries were still using Mainz gladii.

While the Mainz gladius was associated with the frontier of the Roman Empire, the less battle-effective Pompeii gladius became a common choice in the home lands. The Pompeii gladius was not curved; it had parallel cutting edges. The point was still triangular, but greatly diminished.

With a blade length of 45-50 cm and a total sword length of 60-65 cm, this was the shortest of the gladii. The blade width was around 5 cm. A full sword would weigh around 700 grams, including a wooden hilt.

The Pompeii gladius is named after Pompeii, but has been found in many other locations as well. Based on how many swords that have been found by archaeologists, this seems to have been a common sword. It was in use parallel with the Mainz gladius for a long period of time.

The Fulham gladius looks like a compromise between the Mainz and the Pompeii gladii. It has straight edges, but ends in a long triangular point. The sword blade was circa 6 cm, which is wider than a Pompeii but narrower than a Mainz.

The canonal Fulham gladius was discovered in the river Thames near Fulham in South West London. Based on this, it is believed to be younger than the start of the Roman occupation of Britain. (The invasion of Aulus Plautius took place in the year 43 AD.)

The Fulham gladius was in use until the end of the first century AD.