The lorica squamata was a type of scale armor used by Roman soldiers. It consisted of numerous small scales wired to each other and fastened onto a backing fabric. This distinguishes the lorica squamata from the lamellar armor and the locking scale armor, since none of these armor types need backing.

Regrettably, no complete lorica squamata have been found, so what we know about them is largely derived from fragments and from artistic depictions of Roman soldiers. Armor fragments, including complete scales, are a rather common find for archaeologists and have been discovered even in non-military dig sites. 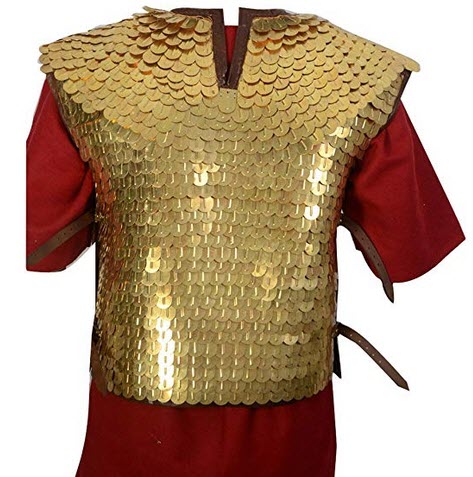 In art, a wide range of army professionals have been depicted wearing lorica squamata, not just regular legionaries but also auxiliary infantry men, centurions and cavalry troops. Specialists such as standard bearers and musicians have also been depicted with this type of armor.

The lorica squamata was used during the Roman Republic and the Roman Empire.

One unusual variant is the one where a lorica hamata is used as backing. This gives the bearer increased protection, but the armor becomes much heavier and also more expensive.