The lorica hamata is a type of mail armor used by primary legionary and secondary auxilia troops in ancient Rome. 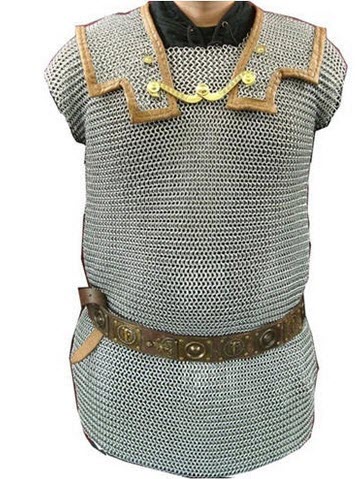 A lorica hamata consists of alternating rows of closed washer-like rings and rows of riveted rings.

The metal used for the lorica hamata was chiefly bronze or iron.

A large lorica hamata could be comprised of up towards 30,000 rings.

The shoulders had flaps running from mid-back to the front of the torso. These flaps were connected by metal hooks (brass or iron) which in turn connected to studs riveted through the ends of the flaps.

Later versions of the lorica hamata often came with sleeves and protected the leg down to the knee.

Lorica hamata was used by soldiers of the Roman Republic and the Roman Empire.

A lorica plumata wasn’t just difficult and time consuming to make, it also required much more maintenance than an ordinary lorica hamata.

We don’t know how useful a lorica plumata was in the field, but wearing something that looked as impressive as the lorica plumata might have been a way to scare the opponents and boost the confidence of the Roman soldiers.