The pilum was a javelin used by the ancient Roman army. Modern-day experiments have shown that the pilum probably had an effective range of up to 15-20 meters. 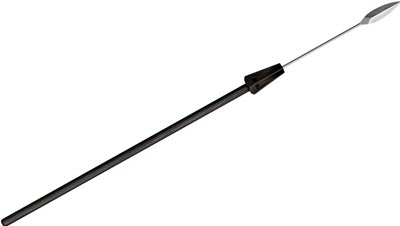 During the late Republic period and early Empire period, a practice persisted where Roman legionaries would carry not just one but two pila, sometimes with one being lighter than the other. The soldier would typically throw one pilum, or both pila if time permitted, at his enemy before rushing in with the gladius sword to engage in close combat.

A pilum could also be used in close combat or to form a barrier against cavalry. We know that pila were used for hand-to-hand combat at the Siege of Alesia and during Mark Antony’s campaign in the Parthian Empire.

This is how the Roman writer Vegetius writes about the pilum in his work De Re Militari from the late 4th century AD:

As to the missile weapons of the infantry, they were javelins headed with a triangular sharp iron, eleven inches or a foot long, and were called piles. When once fixed in the shield it was impossible to draw them out, and when thrown with force and skill, they penetrated the cuirass without difficulty.

They had likewise two other javelins, the largest of which was composed of a staff five feet and a half long and a triangular head of iron nine inches long. This was formerly called the pilum, but now it is known by the name of spiculum. The soldiers were particularly exercised in the use of this weapon, because when thrown with force and skill it often penetrated the shields of the foot and the cuirasses of the horse.

It should be noted that when Vegetius wrote this, the Roman’s were no longer using pila; the pila had been replaced by weapons such as the plumbatae and the spiculum. Vegetius wrote about the Roman Army that had existed long before his time, and it is very possible that he sometimes described a lofty ideal rather than reality.

Most pila used by the Roman army were roughly 2 meters in overall length. The shank, which was made form iron, was roughly 60 cm long and joined to a wooden shaft by either a socket or a flat tang. The shank was around 7 mm in diameter, and it ended with a pyramidal head which was made from harder iron than the rest of the shank.

A standard pilum would weight between 2 kg and 5 kg. Generally speaking, pila made during the earlier Republic era were heavier than those produced during the later Empire era.

A pilum would usually not have any hand-guards, since it was chiefly intended to be thrown. Pila with small hand-guards did exist however, although rare. These small hand-guards were probably there to help the user if the pilum was used as a melee weapon.

Since the iron used for the shank (except for the tip) was comparatively soft, the shank would bend on impact. This was beneficial for the thrower, since it made the weapon rather useless for the enemy; after impact it would no longer function well as a throwing weapon.

When a pilum struck a shield, it had a tendency to get stuck there. The owner of the shield – if he was still alive – would either need to discard he shield or waste precious time removing the pilum, if possible. The pyramidal shape of the tip made it difficult to pull out the pilum, and the shaft normally bent on impact which could make it impossible to free the shield by pushing the pilum all the way through the shield.

Most javelins of the era was not designed to penetrate shields, but the pilum could. Also, the pyramidal tip made a whole in the shield that was wider than the rest of the pilum, making it possible for the tip to keep moving forward and stab the person holding the shield.

After the 4th century BC Gaul invasion of Italy

In 387 BC, the Gauls invaded the Italian peninsula, defeating the Roman Republican army and plundering Rome. This massive defeat prompted the Romans to reform their army. One of these changes involve rearming the Hastati and Principes soldiers with short swords and two pila instead of the hasta spear. (The Hastati formed the first line, the Principes the second and the Triarii the third line. The Triarii kept heir hasta spears even after the reform.)

The veruta of the 3rd century BC

In the third century BC,the Roman legion added Velites to their tactical formation. The Velites were a light infantry that would go up fairly close to the enemy, hurl javelines and then retreat back again. The Velites were armed with a short sword and several small javelines, but these javelines were not called pila; they were veruta (singular: verutum). Making the veruta cost less than making pila.

In the late Roman Empire, the Roman infantry had their pilum exchanged for a plumbata, which was a lighter and more long-range javelin. The plumbata was almost an arrow (albeit sturdier), and had leather vanes that made it more stable in the air and caused it to rotate which improved its accuracy. Due to its lightness, it did not have the armor-piercing capability of the pilum.